Boys’N’Barry were honored to be included in Issue 24 (pg 60-61) of Write Away magazine wrt their song Safe At Home This Christmas written by Barry Geldzahler and Clare Steffen and produced by William Sherry. Here’s the link to the article: https://online.pubhtml5.com/aqbh/drwx/#p=1

Jon Sexauer updated the group cover photo in Sharing our Local Music Through Radio!!! East to West , Across the US...

We here are proud to present our next honoree for artist of the week and this goes out to singer songwriter Barry Geldzahler and his fabulous outfit Boys' N' Barry. He's got a new album out called Take One and it is superb. It's an amazing listen from start to finish, and after just a few listens you will find yourself singing along to very memorable tunes!! Thank you Barry this is your week!!

Jon Saxauer on-air radio personality at Mark Skin Radio (Minnesota) played “Reach For The Stars” from the Boys’N’Barry “Take One” CD.  “To me upon listening to it the song itself just screams radio airplay hit record. It made an impact right off the bat and the choice was easy, this would be the first selection I would air!!”

April's Fool
One of the MidAtlantic Song Contest Winners 2019

You Can Do It
The overall structure is good – the sections are succinct, flowing one to another with their own melodic identities and keeping the energy up.  Total length is good too.

The hook is very clear and obvious in the context of the song…lots of effective repetition and a big payoff for it.  Very catchy too. The lyric is staying on track to the main idea of the song – got some inspiring lyric that fits well with the “success” direction and also stays entertaining as well.

Got a very catchy melody here, especially with the Chorus and the hook…great job there.  Again, every section has its own melody and identity so that was a really good approach as well. The overall vibe and production sound pretty dang peppy,

This is a strong version of the song and I think it’ll work well for that specific intention overall.
(excerpted from NSAI song evaluation)

Hey Bazza,
Had a listen to your newest track, well done, sounds rad as! Nice full round sounds, rhythm guitar is fat also, nice warm deep with distortion, and chord progression is a ripper. Catchy melody, I like how the track is more the minor side in the verses , and has words that will get stuck into head after a few listen! 🙂  Andy Sellars

2013
Reach For The Stars
Best of SongU

Reach For The Stars
Adopted as the official theme song for the Federation of Galaxy Explorers; http://www.foge.org/ 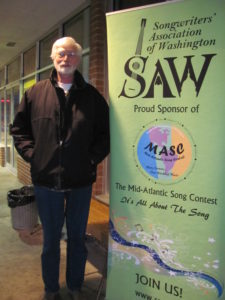